As you can see I didn’t this isn’t part of my favorite camera series. It isn’t a bad camera, it just isn’t one of my favorites. I first discovered this camera after seeing the work of Catbagan on flickr. He was shooting some amazing sprocket images with great clarity that I hadn’t been able to achieve with my plastic lens Holga( what a surprise). He was using a Lubitel for some of his images and I wanted in on that.

There are three basic models, the Lubitel I, II and U. I found an website of a Russian guy cleaning and selling Russian camera’s. I placed my order for a Lubitel II and after a few weeks the nice postman brought me my package straight from Russia. After marveling at the top down viewfinder I tried putting in a 35 film cartridge and I was sorely disappointed. It didn’t fit. After googling a bit more I found out only certain types of Lubitel are able to fit in a cartridge without modification.

A bit let down I put in a roll of 120 film and went around town shooting with the Russian TLR. It was my first time shooting 100% manual without some type of light meter. I did download and print out a useful exposure guide. My images turned out okay, but I wasn’t 100% happy since my original intent was shooting sprockets. I also discovered my Lubitel had light leaks but since having owned a Holga I knew that taping up every nook and cranny with black tape would fix that. 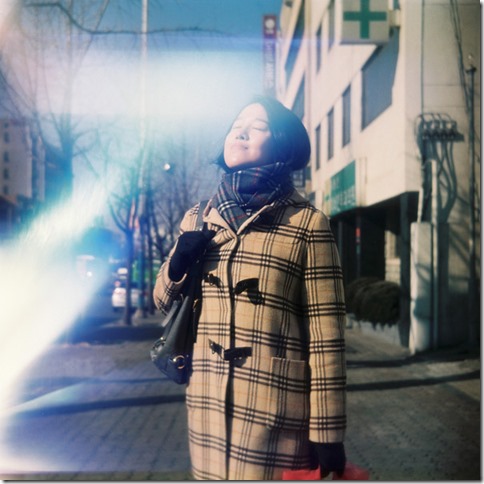 After some more googling I found a guide where it showed somebody cutting some 120 spools in half to fit a 35 film cartridge inside a Lubitel 2. This allowed me to shoot with 35 film and get the sprockets I always wanted. After getting back my developed film I was not excited about my results. I found the results coming from my Holga to be more satisfying. Also shooting with a Lubitel required more thought and consideration regarding exposure while with the simple Holga I was shooting quicker and faster snapshots. 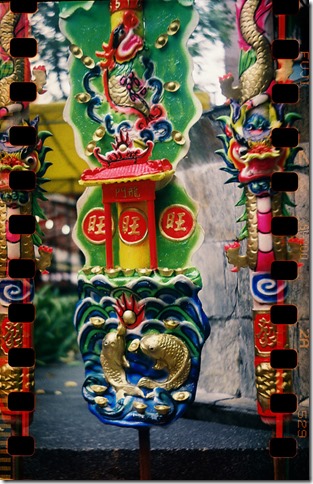 The Lubitel looks great though and I like looking down into the viewfinder and it makes people less suspicious when taking street photography shots and less likely to image they are my main subject. I did like some through the viewfinder shots I managed to capture and this is something I want to revisit in the future. On flickr you can search for “TTV” or “TtV” (through the viewfinder) and find much better examples than mine and also the incredible contraptions people built in order to block out light and get the perfect focus distance. It seems Pringles cans and cereal boxes are quite popular for this purpose.

Now that I have looked back on my Lubitel experiences I feel I should give this camera another chance and I will update this blog with any new images I get from this unique camera.